skip to main | skip to sidebar

The Beating She Had Been Begging For

I got the beating I had been begging for. The one that had been taking up time consuming my thoughts well before the innuendos leeched out and encircled him. I have no poker face, I should stop trying.
The idea had manifest in my core even before my mind was aware of it: an indefinite longing for pain that I could neither defend nor deny. Some of us ache for cruel affection, like a secret prayer; there is no avoiding the desire. A strange communication can be accessed through experiencing shared pain. Lines tend to blurr between the giver and reciever, it is a dangerous addiction. In my worst days the brutal lust that I crave is terrifying, in my best days it is the same.
Yes, I did get the cruelty I had been yearning for finally. It did not look like the images that had been floating in my head, it was not what I asked for but it turned out to be exactly what I wanted.
In the hope of luring his sadistic aggression, I not-so-casually dropped indiscrete hints about my impure cravings. They were easily interpreted clues that my cruel lover let dance in the air rather than appease me with action. I threw cellophane hints on him as if I were dropping flower petals at his feet. It was insulting really but he seemed to enjoy the play of it all, such silly innocence. Mine was a transparent courtship for specific aggression. I flaunted deliberate delays to irritate him; a lazy departure from my typical attentiveness. I gave impudent contrary answers to his gentle questions. I was just looking to be slapped. And throughout the antics my lover ignored my sweet and hungry overtures.
Perhaps as a consequence of my indirect entreaties he beat the sense out of me… into me?
In my blind quest for violent attention I forgot about the dangers of expectation and the traps of assumptions. I considered my options and some of the ways I wanted it all to play out. With hands crossed over my chest I longed for A clean ass spanking… being bound and gagged for a good flogging… blindfolded and struck with the riding crop until the soles of my feet blister… slapped with the long wooden spoon until the handle splinters into my fleshy thighs… all musings to entertain myself while I waited in want for his violence.
But, I was foiled by my own (mis)calculations and now I will be forced to stand throughout the rest of the day because the bruises on my bottom are much too agonizing to afford me the luxury of sitting. Those are not dark pink welts from a firm hand that caused turgid deformation and a swollen behind. Those are carved incisions, two on each round orb. Still oozing lymph and grains of red blood where the blade pierced initially before slicing a clean cut down each surface.
Posted by Besu at 12:08 PM

If you are under 18, please leave. The content on this site is not appropriate for you.
All of the acts depicted on this site are consensual. All of the characters are legally consenting adults.

Perhaps everything that frightens us is,
in its deepest essence,
something helpless that wants our love.
-Rainer Maria Rilke 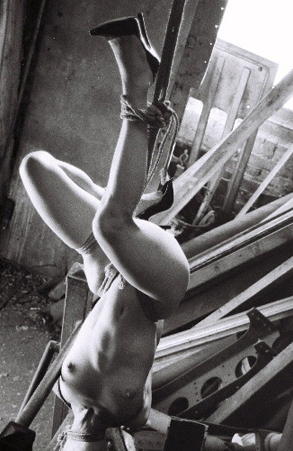